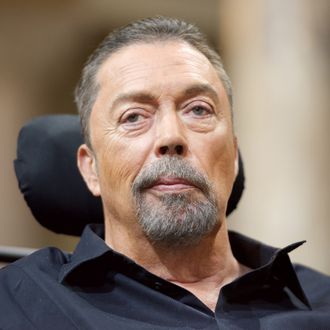 You might have already picked out two perfect films for a science fiction double feature this Halloween, but you can go ahead and save those for literally any other night. Tim Curry, star of the iconic horror-comedy Rocky Horror Picture Show, will accompany a motley crew of ghouls on Saturday night to benefit the Wisconsin Democratic Party.

According to the Hollywood Reporter, Curry will be joined by his costars from the 1975 film, Barry Bostwick and Nell Campbell, who played Brad Majors and Columbia respectively, for a livestream of Rocky Horror. They’ll also be joined by Wilmer Valderrama, Lance Bass, Rosario Dawson, Jason George, Seth Green, Jason Alexander, Taylor Schilling, and David Arquette, among others.

As for music, performances will be provided by the Dresden Dolls, Miss Peppermint, Eiza González, Josh Gad, Ben Barnes, Jenna Ushkowitz, Rachel Bloom, Karen Olivo, Marissa Jaret Winkour, Madison Uphoff, Kalen Chase, and Rumer Willis. You do have to donate to view the livestream, which goes live at 10 p.m. ET on Saturday, October 31, but there is no minimum amount required.

Curry has scaled back live appearances since suffering a stroke in 2012, focusing instead on voice acting in animation and video games. In 2016, he portrayed the Criminologist – An Expert, the film’s narrator, in Fox’s live televised version of Rocky Horror, in which Laverne Cox slipped on some fish nets to play the good/very bad doctor.