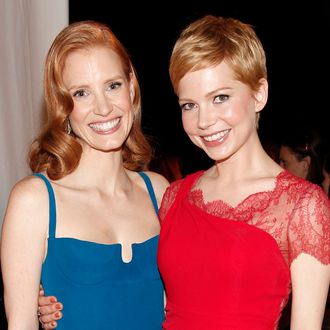 From Brokeback Mountain to Fosse/Verdon, if you want a woman who can really get across how much her marriage is slowly killing her inside, you’re going with Michelle Williams. Unfortunately, due to scheduling conflicts, the Manchester By the Sea actress has had to leave HBO’s upcoming adaptation of Scenes From a Marriage, passing the sad on-screen marriage mantle onto Jessica Chastain.

According to the Hollywood Reporter, Chastain will join Oscar Isaac in the network’s upcoming American version of the six-episode 1973 Ingmar Bergman miniseries, which starred Liv Ullmann and Erland Josephson as Marianne and Johan, a married couple grappling with monogamy, domestic boredom, infidelity, and, of course, the looming specter of divorce. Chastain and Isaac have starred together before as an unhappy married couple, in 2014’s A Most Violent Year, but their unhappiness had more to do with the influence of organized crime on the oil and gas industry than their specific relationship.

As for Michelle Williams, her next announced project is Venom: Let There Be Carnage, which presumably will not feature a happy marriage either, or, if she and Tom Hardy’s Eddie do tie the knot, an alien symbiote bonded to a serial killer will probably put the kibosh on that wedding day pretty fast.