AT&T (NYSE:T) has been experiencing some headwinds during the current crisis, but sentiment has been too weak. AT&T’s share price has declined quite a lot this year, but the company continues to generate solid profits, and its cash flow generation remains excellent. Even its underlying business performance in key segments such as wireless and HBO has been encouraging.

I thus believe that the company’s share price has been punished too much and that shares provide significant total return potential at the current, discounted level.

AT&T is the cheapest player in its industry, trading at a significant discount compared to peers, no matter whether one looks at its P/E ratio, its cash flow multiple, or the enterprise value to EBITDA ratio. This low valuation could lead to strong total returns over the coming years, we believe.

AT&T Is Hit By This Crisis

The current pandemic, combined with the recession it caused, has hit AT&T’s business, there is no denying it. Less live sports (no Olympics, for example) means lower TV revenues, and the hit to the movie industry has been even larger. Following its takeover of Time Warner a couple of years ago, AT&T has exposure to the movie industry through its Warner Bros. subsidiary that owns units such as DC Movies, New Line Cinema, and many more. Due to lockdown measures and social distancing, theaters have seen a huge impact from the current crisis, and box office revenues are down sharply this year. AT&T has not had a lot of success with its large and expensive film Tenet, which has only grossed $330 million worldwide. Without the pandemic, the movie would have had a chance of grossing $1 billion or more, thus this is a big shortfall for AT&T’s movie business.

Similar headwinds to AT&T’s operations are visible in other business units, as some enterprise customers, for example, are trying to reduce expenses during this crisis and have cut their spending. But then again, the headwinds for AT&T’s business seem to be priced in already:

AT&T’s shares dropped more than 30% this year, thus the market has reacted very unfavorably to the issues that AT&T is experiencing in some of its business units. At the time of writing, shares are trading below $27, which is basically the lowest share price in the last 10 years. Was a share price decline from the high $30s, where AT&T has traded at the beginning of the year, justified? We think that the answer to that question is yes, after all, the short-term outlook for profits and cash flows has diminished. But then again, when we look at the company as a whole, the impact of the pandemic and the recession have not been too large, and a 30%+ share price drop seems like an overreaction.

Despite Headwinds, Many Things Are Going Fine

AT&T reported its third-quarter earnings results on October 22, and those were better than some investors had feared. AT&T beat revenue estimates while reporting profits that met the analyst estimate. The headline results can be seen here, but in this article, we will take a closer look at a couple of specific, important items.

AT&T’s Mobility Group, part of the Communications segment, has done quite well during the most recent quarter. A strong pace of subscriber growth in the wireless segment, with more than 1 million postpaid net adds, has allowed for encouraging growth in the segment. The unit did $18 billion in revenues, up 1% year over year, despite some headwinds from the pandemic, notably lower (international) roaming revenues as customers spent more time at their homes and did not travel much. Margins remained very solid as well, at 43.1%, just down marginally year over year.

Another encouraging fact from the business unit is that churn has declined notably year over year, from 0.77% to just 0.69%. This shows that worries about increasing competition from T-Mobile (NASDAQ:TMUS), following its acquisition of Sprint, may not be justified. At least in the most recent quarter, there are no signs of stress for the business based on any potential price wars or similar competitive headwinds. Rather, the business unit remains a source of strength for AT&T and continues to generate large amounts of cash.

2. HBO Is Growing Faster Than Expected

When AT&T acquired Time Warner, HBO was one of the priced assets that seemed to have a promising future. AT&T’s management sees a lot of value in this asset as well and has been positioning the company for a more streaming-centric future through the build-out of HBO Max. Previously, AT&T targeted subscriber numbers of 36 million by the end of 2020 domestically, but subscriber growth has been stronger than expected, which is why HBO and HBO Max already hit 38 million domestic subscribers during Q3, thus a significantly higher subscriber count at an earlier point in time. To us, this shows that the outlook for HBO could be significantly better than the market is giving AT&T credit for right now. This likely is due to a combination of factors, including the strong original content on HBO, increased TV consumption from US-based consumers due to the fact that lockdowns and social distancing force people to spend more time at home. Lastly, more money is available for subscription services, since people do not spend as much on travel, dining out, etc. as they did before the pandemic.

More time spent at home and the search for entertainment options is likely also the reason for an improvement in the cord-cutting trend. AT&T lost 590,000 Premium TV subscribers during the quarter, which is not great, of course, but which still is the slowest decline rate over the last year. One year earlier, for comparison, AT&T has lost 1.16 million subscribers during the Q3 quarter. The trend thus looks favorable here, as a lower subscriber loss rate will eventually lead to a stabilizing business.

Our thesis on AT&T, as well as the reason why we have been bullish in the recent past, is that its great cash flows will allow for a lot of deleveraging, while the company should be able to keep its dividend in place at the same time. This has not changed much during the pandemic: 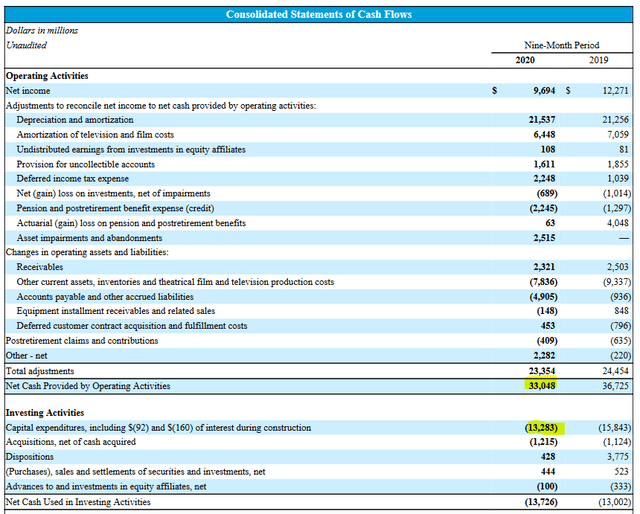 We see that year to date, AT&T has generated operating cash flows of $33 billion, while the company has spent $13.3 billion on capex during the same time. This results in $19.7 billion in free cash flow this year, down just $1.2 billion versus the first three quarters of 2019. Free cash flows have thus declined by ~6% so far this year, which makes the 30%+ share price drop seem quite unjustified. Even better, though, the cash flow performance during Q3 was better than the performance during Q1 and Q2, which makes it look rather likely that the bottom has been hit and that cash flows will improve going forward, during Q4 and in 2021. Free cash flow during Q3 was $8.3 billion, which equates to a massive $33+ billion in annualized free cash flows. The strong cash generation shows that worries about a dividend cut are not really justified so far, as the quarterly dividend payout has been covered at a ratio of 2.2 during Q3 – the company had to utilize just 45% of its free cash flows to finance its dividend. This does not at all sound like the company would be forced to cut its payout anytime soon.

4. Debt Is Being Addressed

One issue that prevents many investors from buying shares of AT&T is its debt level. On an absolute level, debt indeed is high, although AT&T does not look overly indebted when one considers the strong levels of cash flow and EBITDA. Nevertheless, it is good news that management is focused on reducing debt levels, and it even managed to do that during the middle of this pandemic. During the third quarter, AT&T’s net debt declined by $2.9 billion, for an annual debt reduction pace of ~$12 billion. Net debt stood at $149 billion at the end of September, down by more than $30 billion since the Time Warner acquisition closed. Debt reduction is thus not only an empty promise, but management also is clearly delivering despite the pandemic.

We can summarize that not everything is great at AT&T, and the company is feeling some headwinds from the pandemic, as laid out at the beginning of the article. But then again, not all things are bad, either – the company is doing well in a couple of key themes. The dividend is not in danger, thanks to the fact that the company continues to gush cash, and debt reduction remains on track, even during these tough times.

Is AT&T a high-growth company that deserves a high multiple? We don’t think so, but there is a good entry price for almost every stock. Valuation matters, and AT&T seems to be priced for disaster. We believe that, mainly thanks to a very high dividend yield of more than 7%, AT&T is a solid buy at current prices. Once the pandemic has ended and people can go to the movies, profits should improve further, and some multiple expansion could easily lift AT&T’s shares back to the mid-$30s a year or two from now.

At current bombed-out prices, the downside seems rather limited, while total returns could be attractive over the coming years – even without a lot of share price growth, thanks to a very high initial dividend yield.

If you found this article interesting or helpful, it would be greatly appreciated if you “Follow” me by clicking the button at the top, or if you “Like this article” below, as this will help me in building an audience and continuing to write on SA. If you want to share your opinion or perspective, you are also very welcome to comment below. Happy investing!

Is This an Income Stream Which Induces Fear? 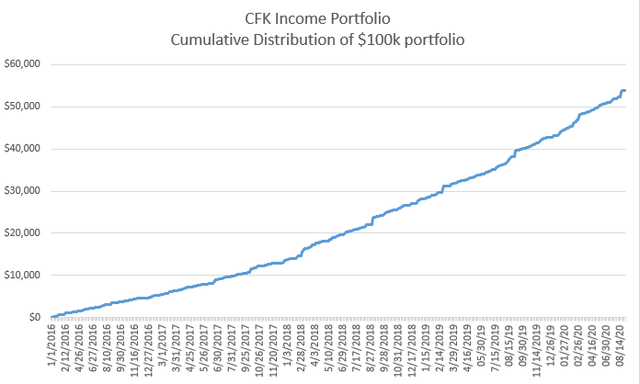 The primary goal of the Cash Flow Kingdom Income Portfolio is to produce an overall yield in the 7% – 10% range. We accomplish this by combining several different income streams to form an attractive, steady portfolio payout. The portfolio’s price can fluctuate, the income stream not so much. Start your free two-week trial today!

Disclosure: I/we have no positions in any stocks mentioned, and no plans to initiate any positions within the next 72 hours. I wrote this article myself, and it expresses my own opinions. I am not receiving compensation for it (other than from Seeking Alpha). I have no business relationship with any company whose stock is mentioned in this article.